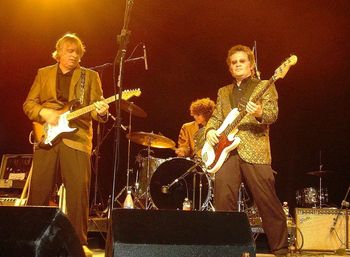 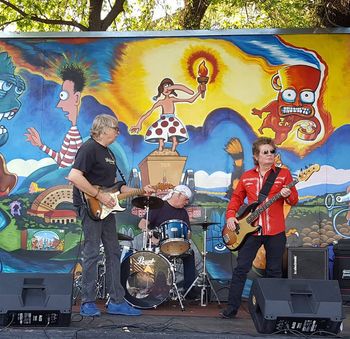 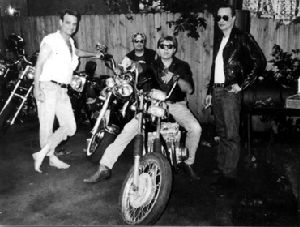 Based in both Austin, Texas and Los Angeles, CA - 3 Balls of Fire, AKA The Men with the Burning Guitars, was formed in 1987 by guitarist/composer/band leader Burnin' Mike Vernon. Vernon and joined his first band, Stoned Catsup, in Arlington, Texas, in 1969. From '73-'75 Mike studied Spanish guitar at the Univ. of Texas-El Paso and then returned to the Dallas-Ft. Worth area where he played in various jazz, blues, rock, and western bands.

In '79 he formed the instrumental group Perry Mason & the Defendants and cut two 45's for the Mars label. The group played all over the north Texas area, Louisiana and Oklahoma. By '82 the band's sound turned decidedly surf in nature as the band performed surf guitar songs from the '60's and originals by Vernon.

In 1985, Vernon moved to Austin and in 1987 formed 3 Balls of Fire. Joining in on bass and drums was Vic Gerrard and Chris Stix Staples, forming the tightly-wound rhythm section on the Balls' self-titled debut recording on Amazing Records in 1987.

In 1989, Gerard and Staples joined Two Hoots and a Holler, and Vernon kept the group alive by adding Jackie Newhouse (Stevie Ray Vaughan's bassist until 1980) Steve Fulton on guitar & drums, and a revolving list of stellar players from the Austin area. In the early '90's, the group released two cassettes, toured from Louisiana to California, had their music featured in the movie Good Girl, Bad Girl, and opened for Dick Dale's first national tour in Austin in 1993.

The original lineup of 3 Balls of Fire reunited in 1998 and released The Best of the Balls, 1988-1998 CD to critical acclaim. After two years of regular Friday night gigs at Ego's Lounge, they released the Friday Night at Ego's Lounge CD on Austin's Deep Eddy Records in January 2000. The Austin Chronicle listed the album in the Texas top ten of 2000. The same year saw the band do a tour with George Tomsco, backing the legendary guitarist for the Fireballs. In June 2001, Nokie Edwards of the Ventures toured select Texas cities with the Balls as his backing band!

The Balls released their FirePower CD in 2002, Chrome & Water in 2004 and Jet Set Guitars in 2008. All of the Balls' Cds have landed in several top ten of the year lists. Firepower was followed by the FirePower Express tour in summer 2002, and several cuts from the CD appeared on national tv (WB, FOX), NPR, three surf compilations, two surfing videos and Muzack!!! The Shock-n-Awe tour of 2003 was a smashing sucsess, and 2004 saw the release of Chrome & Water and several west coast appearances. In 2005, legendary guitaristc Link Wray hand-picked Vernon to share guitar duties at the Ponderosa Stomp in New Orleans. With appearances in New York and London,emmy-winnning television credits and the prestigeous Austin Music Awards in '06, the Balls rolled into 2007 full-steam ahead. In 2008, the band won Best Instrumental Band in the Austin Chronicle and released their seventh album, Jet Set Guitars. That same year, Vernon moved 3 Balls of Fire's headqurters to Los Angeles where he showcased his ever-changing West Coast Offense, which featured some of LA's finest players and that added a new slant on the Balls overall sound. Now based back in Austin, 3BF continues to churn and burn it down - wherever they go!